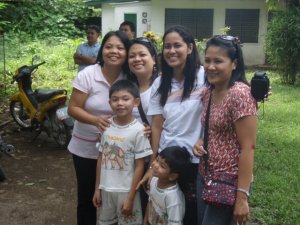 This was our theme song during the early 90s in the UPLB Navs — a campus Christian ministry anchored on the mission of knowing Christ and Making Him Known.

I was a nerve-wracked kiddo fresh from the province and an easy prey to opportunists lurking in the university when I found the Navs by chance (nope, it was Divine intervention.) On a rainy afternoon sometime in July 1991,infront of CEC building at UPLB, I chanced upon two cute(?) but promdi-looking (read: sheepish) guys on their way to attend a fellowship (I later learned they were Joey O and Kuya Rico P.) At that time, I was waiting for a friend who invited me to attend the Victory Christian Fellowship in the same building. I asked the two guys (there was nothing suspicious about them. They in fact looked as naive as I probably looked also) where the fellowship would be held and they directed me to the same fellowship they were about to attend. I thought all along that was the VCF. I only found out after two hours- after the worship, message and fun, that it was not the VCF that I attended but the UPLB Navigators! Ha, ha. Talk about mistaken identity — a “Wow Mali” episode. I had fun that first day though so I stuck with the Navs. I soon became a family member (by mistake).

The batch I belonged to– the 90s (taken from our student numbers) was a bunch of nuts. Maynard whom we called Bart (coz he was a dead ringer for Bart Simpson, the popular cartoon character at that time) always wore a toothy smile (with matching golf-ballic eyes).He was the alaskador– the one guy who was always armed with cracks of jokes.Dennis was the more serious type. Mel was the philosopher. During discussion time, his ideas were the ones I could not decipher at once (though I pretended I did). Junok- a pastor’s kid came a year later and instantly clicked with the gang. He once lamented the seeming distance of the campus ministry-a para church from the church where he grew up.(Well, I guess he had long dealt with this initial impression because he never left us). And the lovely girls? We all hit it off right away (even if I got envious from time to time of Vicvic’s long and shiny mane). I felt kinda secured and still at peace knowing that my curls were in the same league as those with Debbie Joy and Eden’s curls.He, he. There and Jenny were the prim girls who just coasted along with much gusto. And Dence? we were inseparable (especially during munching time)until the day I met my destiny.

Some Ate(s) were unforgettable. Ate Julie and Ate Nenen were my BS leaders.Ate Ann, my room mate at 4106 of the Women’s Dorm had the heart of a child but the wisdom of an old sage.She was a witness to my heart’s adventures and escapades in the university–from the time I fell for a young preachy student leader of a different campus ministry (all the while crying my heart out while Desperado was being played on the airwaves) to the day I turned down the proposal of an avid suitor named Jeric.

I learned a lot from the life of our mentors — Kuya Soc and Ate Ched, Kuya Rex and Ate Vangie. Their open homes were a haven to our confused and weary minds. We loved the games — pictionary, uno, charades. We loved the food even more (with different themes)– mexican dinner, Ate Ched’s tacos, etc.But we loved the LOVE bursting in the air the best! The Arzadon kids –smart Cocoy, pretty tiny Aio, and manly-looking Chico (later known as Tembi) added up to the excitement of our Nav life). And who can forget Kuya Rex and Ate Vangie’s Jingle? — a japanese peach with white shiny fur that was very much part of the family. Mommy (Ate Vangie’s mom)was an adorable granny who was always excited to see us every time we raided the handsome Legaspi abode.

I had the opportunity of living in a ladies’ training apartment– the Mt.Olive’s apartment. I was with Day Raq, Aleli, Ate Julie and Ate Car. That was a learning experience and am sure we all had our share in smoothing one another’s rough edges.

Special People Worth Mentioning
The Vitos (thanks for the free overnight stays at Jubileeville!)
Kuya Wency and Ate Cel ( I first met them in Naga, of all places)
Ate Pearl (Such a childlike heart)
Ates Gigi, Precy and Fe (ladies from the Praise Apartment)
Ate Nena, Ate Chats (I still wonder up to this day why you cried when we prayed together. Was there something I missed? Ate Car, Ate Queen, Amor
Moriah Guys -Kuya Dario,Kuya Rodel,Kuya Rico and the REST
Kuya Nonoy
Leigh, Heidi, Edna M, Lot

Memories… they are meant to be savored.

“And let us consider how we may spur one another on toward love and good deeds. And let us not give up meeting together as some are in the habit of doing, but let us encourage one another and all the more as you see the day approaching.” Hebrews 10:24-25

One thought on “The UPLB Navs -After All these Years”